I just got this banner ad trying to recruit me. Sums up the general tone of the defense industry perfectly. Hubris, nationalism, and technologically sophisticated bombers.

But what do they mean by "America Wins. Again."?

You'd never know it from our movies and TV shows and political rhetoric, but we have not in fact been winning.

We lost the war in Afghanistan. After almost $1000b, 14 years, several thousand American lives, and several hundred thousand Afghan lives, Afghanistan is a failed state. The country harbors more terrorists than when we started, the Taliban is still around, and still controls significant chunks of the country.

We lost the war in Iraq. After a staggering $1700b, 13 years and counting, and several hundred thousand lives, Iraq is more dangerous than it was under Saddam Hussein and its remaining people are worse off. The country is split into three warring parts: a nearly failed state in the south, Kurdistan in the northeast, and the Islamic State in the north.

We switched reasons. First it was weapons of mass destruction, then a nation-building exercise to replace dictatorship with democracy. Thomas Friedman even tried to justify it as a generalized collective-punishment retaliation against the Arab Muslim world for 9/11. "We could have hit Saudi Arabia. We could have hit Pakistan. We hit Iraq because we could." Charming dude.

Pick any of those justifications. They all failed. There were no WMDs. The nation-building could not possibly have gone any worse. Most of the Islamic State's heavy weaponry comes from America. It's a frustratingly familiar story. We arm "the good guys" and then the weapons "fall into the wrong hands". 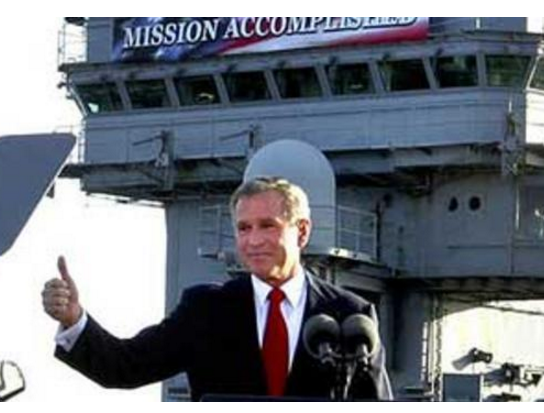 We lost the war in Libya. The story played out surprisingly similarly to Iraq. The old dictator was killed. Some politicians declared victory. The resulting stable US-friendly democracy didn't quite work out that way. Just like Iraq, Libya is now split into three warring thirds, one of which is part of the Islamic State.

It's a jingoistic and amoral industry.

These companies lobby for war, though they prefer to use words like "intervention" and "military aid". They provide lucrative jobs to lots of former generals and politicians in exchange for promoting their agenda and helping them win contracts. This is called the "revolving door"--a euphemism for salary-and-bonus-based corruption.

Even now, after all of the above, they are still pushing for deeper involvement in the Middle East, telling their shareholders it would be good for business.

That doesn't mean we're isolationists or pacifists. It's good to speak softly and carry the world's biggest stick. It's cool to quietly underwrite the freedom of allies like South Korea and Japan and Taiwan.

It's not cool to be in a state of endless war. The average voter couldn't even tell you which countries we're currently bombing. (Iraq and Syria by jet, Afghanistan and Pakistan by drone, and Yemen by proxy.)

War should be a last resort and strictly for self defense. We should crack down on the corruption of the military industrial complex. We need a voice. We need leaders who are serious about peace.